After a rare stomach condition threatened to sideline a young athlete, he found an innovative solution at Children’s Health

At 15 years old, Hunter was busy making the most of high school. He played multiple sports, did well in classes and enjoyed spending time with his friends. So when the normally healthy teen started feeling nauseous on his way to a wrestling tournament in 2016, he and his mom just assumed he had caught some type of stomach virus.

But when Hunter got home, his symptoms grew more intense, and he began throwing up daily. His pediatrician referred him to a pediatric gastroenterologist in his hometown of Little Rock, Arkansas. She, too, initially suspected Hunter might be suffering from a severe stomach virus and would just need to let it run its course.

However, his symptoms persisted, and Hunter began losing a significant amount of weight. He was eventually diagnosed with gastroparesis, a condition which prevents the stomach from emptying in a timely manner and causes nausea, abdominal pain and weight loss since food being unable to reach the small intestine for digestion. His doctor suggested he explore a number of holistic treatment options, including adding certain supplements, essential oils and ginger tea to his diet, but nothing worked.

"Everything changed once I came to Children's"

Hunter's mom, Jenny, began exploring other treatment options for her son and was excited to find expert care a five-hour drive away at Children’s Health℠. Shortly thereafter, Hunter and his mom traveled to Dallas to meet Rina Sanghavi, M.D., Director of the Neurogastroenterology and Motility Program at Children's Health and Associate Professor at UT Southwestern.

"Everything changed once I came to Children's," says Hunter. "We all felt like I was in very good hands."

After exhausting the traditional treatments for gastroparesis – which offered Hunter little relief from his symptoms – Dr. Sanghavi suggested a new state-of-the-art method for treating Hunter's condition: implanting a gastric electrical stimulator that would act like a pacemaker to prompt his stomach to empty on a regular basis. The approach had been previously used in adults and only in a handful of pediatric centers in the country – but none in Texas or the surrounding states.

Dr. Sanghavi believed surgery was the best option for Hunter to get back to a normal life, but it came with a small catch.

"Dr. Sanghavi explained to me that if I decided to have surgery to implant the pacemaker, I would no longer be able to play contact sports," says Hunter. "It was a tough decision, but at that point, I was throwing up eight times a day and missing a lot of school, so I was ready to do whatever it took to feel better."

After getting approval from the FDA, Stephen Megison, M.D., Medical Director of Trauma Services at Children's Health and Professor at UT Southwestern, a highly skilled pediatric surgeon, operated on Hunter to place the pacemaker in September 2016, making it the first time the device was implanted in a pediatric patient in North Texas.

"Surgery went well, but my entire torso was sore for the first day and a half," Hunter says. "I was discharged a day after the surgery, but it took about three days before I could walk normally."

The best news though? Hunter could now eat without fear of getting sick.

"Right after I got the pacemaker, I went a little nuts eating pizza, hamburgers and desserts," says Hunter. "I really enjoyed being able to eat whatever I wanted."

Hunter thrives with the gastric pacemaker – and now, without it 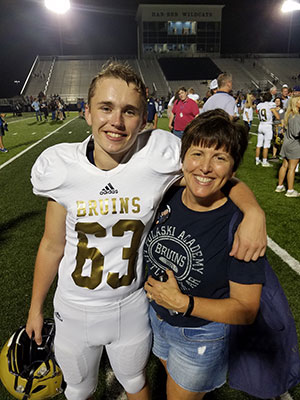 Hunter went back to school feeling better than ever. Though he couldn't play football, he still worked out with the team and filmed their games. His grades started to improve again as he was better able to focus in class, and he even won first place in his age group in a four-mile cross country race.

Over the next two years, Hunter and his family continued to travel back and forth to Dallas for follow-up appointments. At each visit, Dr. Sanghavi progressively lessened the intensity of the settings on his pacemaker to see if his stomach would begin to function as it should on its own. With each adjustment, Hunter's body adapted well – and eventually the device was turned off completely in May 2018.

"I've felt great since it's been turned off and haven't had any of my previous symptoms," Hunter says. "In fact, I feel better than I did before this all started because I'm in even better shape than I was back then. I've already talked to my coach and Dr. Sanghavi, and we've all agreed there's a perfect spot for me on the roster this season – at long snapper."

After an action-packed summer that included an educational, two-week trip to China, Hunter returned to Children's Health on Aug. 15, 2018, to have the device removed. The surgery went well, and Hunter was back on the field less than two weeks later, playing his first football game of his senior year.

The Neurogastroenterology and Motility Program at Children’s Health provides state-of-the-art treatments and care for patients with GI motility issues ranging from upper GI tract dysmotility to the lower tract. Learn more about our program and services.