Diagnosed with type 1 diabetes at age 11, Anthony shows strength and determination as he manages his disease

Anthony has always been an active child. He's played a variety of sports since he was 4 years old and never had any major medical concerns growing up. So when he started losing weight shortly before his 11th birthday, his parents, Laura and Raul, became concerned.

When they shared the issue with his pediatrician at his next wellness visit, Anthony's doctor discovered that his blood sugar levels were unusually high. He suggested his family monitor them over the next few days to see if they returned to a normal level. When they didn't, his pediatrician instructed Anthony‘s family to take him to the emergency room immediately.

"Within a month, Anthony had lost a total of 36 pounds and his blood sugar level was up to 375," says Anthony's mom, Laura.

Anthony was admitted to Children's Medical Center Dallas, where he and his family met Abha Choudhary, M.D., Pediatric Endocrinologist at Children's Health℠ and Assistant Professor at UT Southwestern, who diagnosed him with type 1 diabetes. The news was hard for Anthony and his family to hear, but Dr. Choudhary reassured him that it did not have to stop him from doing what he loved.

Over the next few days, Anthony and his family met with a team of diabetes educators and dietitians to learn how to manage his diabetes, including how to check his blood sugar levels, administer appropriate levels of insulin and count his carbohydrates throughout the day. Finally, he was ready to return home and face his new normal. Anthony admits there was a learning curve at first, but says he just had to accept it.

"The hardest part at first was learning how to do everything in a timely manner – counting carbs, figuring out insulin doses and all that," Anthony says. "But I just had to tell myself this isn't going away so it's time to just get used to it, figure it out and get it done."

Managing his diabetes eventually became second nature to Anthony and his family. Over the years, he has continued to maintain his active lifestyle, supported by his family and Dr. Choudhary, while acting as a mentor to other students with diabetes in his community.

"I try to remind others that diabetes should not block you from anything that you are striving to do," Anthony says. "If you want to play sports, keep doing it; if you want to study in school, focus on that. Don't be afraid to try new things."

Diabetes doesn't hold Anthony back from his goals 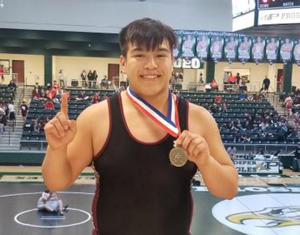 Four years after his diagnosis, Anthony stays busy, focusing on his schoolwork, playing football and wrestling, taking welding classes and playing the trumpet in the school band.

"I wish it could be a different story for Anthony, but he is setting an example for others and showing that diabetes is not holding him down," Laura says. "He is so strong and when people talk, they talk about him, not his diabetes."

In fact, as a high school freshman, Anthony was named "Rookie of the Year" by his high school wrestling team and recently won his weight class at the district wrestling tournament, taking home a gold medal and reaffirming what his coaches have known all along: Nothing will hold Anthony back from his goals. 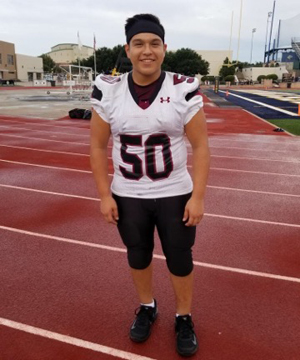 "When you want to see what it means to overcome obstacles in your life, Anthony is a prime example," says Anthony's offensive line and assistant wrestling coach. "He does not allow his diabetes to keep him from participating in the sports and activities that he loves to do. He is a great example for other children with diabetes that they can excel at sports, and to show if you take care of your body and listen to it, you can accomplish what you want out of life."

As Anthony looks toward the future, he hopes to earn an athletic scholarship and go to college to become a game warden. If there is one thing that's for certain, no matter what Anthony decides to do with his life, it will be on his terms.

The Pediatric Diabetes Program at Children's Health offers around-the-clock care for children with diabetes. Our award-winning program gives you and your child the tools you need to live the lives you want, even with diabetes. Learn more about our diabetes program and services.

Discover what's new in hormonal health by signing up for the monthly newsletter from the Endocrinology team at Children's Health. Sign up now.