A dance with type 1 diabetes 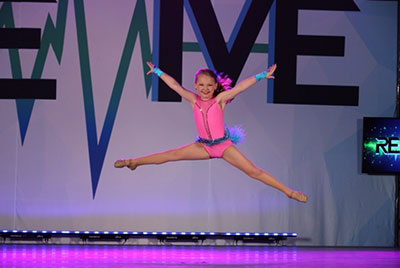 Lily spends every moment she can dancing with her studio. From hip hop to ballroom to tap, she competes in all types of dance. She's been a junior Texas Legends dancer, a mini Dallas Cowboy cheerleader and has placed in the top 10 of solo competitions.

When she dances, all the audience sees is a healthy 8-year-old. It's easy to miss the small pump on her waist and tiny monitor on her arm. Without knowing her, you'd never guess Lily spends each day managing type 1 diabetes.

A surprising diagnosis of diabetes

Lily was just 22 months old when she became sick.

"We were in the car going to my sister's house, and all of a sudden Lily got really sick," says Shauna, Lily's mother. "We thought it was a tummy bug and went home."

However, over the next week, Lily continued to get worse. Though Shauna took Lily to the pediatrician's office, the doctor only diagnosed her with an ear infection and stomach virus.

"She stopped walking. She stopped eating. It was pretty traumatic," says Shauna. "She was peeing through her diapers. She was so little, so it was hard to understand what was going on."

A week after Lily first threw up, she was barely eating though she drank a lot. She had lost weight, and her skin looked gray. Her parents took action, bringing Lily to the emergency room at Children's Medical Center Plano.

Immediately, her nurses knew something was wrong. When they checked Lily for a urinary tract infection, they found glucose in her urine. Her blood sugar had rocketed to 600 while her A1C (a measure of blood sugar over the last 90 days) was 14%. An A1C of 8% or higher indicates out-of-control diabetes.

"The whole mood changed in the ER," Shauna says. The team confirmed a possible type 1 diabetes diagnosis with an endocrinologist and transported Lily and Shauna in an ambulance to Children's Medical Center Dallas for intensive care. Her father, Matthew, and newborn baby brother, Luke, followed behind.

"The first 48 hours were just a blur," says Shauna. "I remember being downtown and being surrounded by doctors. It was just surreal. It was hour-by-hour testing. She couldn't eat or drink anything. It was such a juggling act to get her blood sugar under control."

"Children's Health℠ was wonderful," Shauna says. "The extra care was pretty amazing. It is a place built for kids. Everything is about making them feel safe and secure in the most difficult situations."

Though Shauna and Matthew were devastated by their daughter's diagnosis, Perrin White, M.D., Division Director of Pediatric Endocrinology at Children's Health and Professor at UT Southwestern, reassured them the condition wasn't their fault and that, with the right management, Lily could have a very fulfilling, normal, wonderful life with type 1 diabetes.

"From that point on, my husband and I decided this wasn't going to define her," says Shauna. "We want her to do everything she wants to do. We are going to manage it the best we can and make it part of her life, but not her entire life."

Growing up with type 1 diabetes 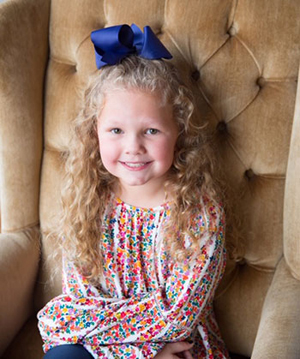 "It's really been a partnership with Dr. Lopez, in our experience," says Shauna. "We feel supported and encouraged, even when her A1C's aren't perfect."

For her first two years with diabetes, Lily received insulin shots, which her mother says she handled like a pro. At the age of 4, she received her first insulin pump and monitor.

"The pump was life changing," Shauna says. "It was hard at first, but got better. She doesn't like wearing these two things on her, but she just owns it and keeps marching."

Shauna says the diabetes educators at Children's Health were incredible teachers, both early in the diagnosis and when they made the switch to the pump. They provided trainings that helped the family understand how to use the pump as well as possible.

Now that she's 8, Lily's pump makes her active lifestyle possible. She often spends entire weekends at dance competitions, taking part in choreography and classes for six to eight hours each day. The monitor helps Shauna see when blood sugar lows are coming so she can ensure Lily has a snack to boost her blood sugar, so she doesn't have to stop dancing.

As Lily has grown up, she and her family have found ways to balance controlling her diabetes, and her newer diagnosis of celiac disease, with letting her live an active life. Not every moment has been easy. Sometimes Lily has to rest during dance classes. Sometimes she can't wear the same things her friends wear because of her pump. Sometimes she feels left out parties because she can't go without a lot of planning like other kids. But she always pushes through. 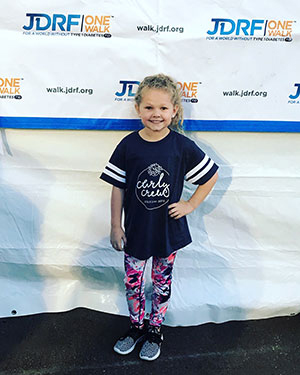 Matthew and Shauna also spend a lot of time planning and finding ways to navigate life with diabetes and a gluten-free diet. She always has to pack snacks and lunches and can't enjoy birthday snacks or treats her classmates bring to school. The family spends a lot of time each day thinking about things other families take for granted, and they always have to be prepared for whatever the diseases throw their way.

Fortunately, the family has received the constant support of Lily's doctors, caregivers, teachers and classmates. Her school raises money for Lily's Curly Crew team for the JDRF walk. Her school nurse knows her well and helps her manage her health.

Lily offers support to others, too. When a boy in her class with type 1 diabetes was getting his pump, Lily helped him feel comfortable with the switch by letting him know how much better life is with a pump.

"I had no idea she was helping him," Shauna says. "His mother reached out to me to tell me what an inspiration Lily had been to him, and it made me so proud of her."