A boy, and his dog, live every day to the fullest

How Easton's type 1 diabetes journey went from fear to empowerment

Easton was 4 years old when he was diagnosed with type 1 diabetes. It was a day his mother, Lexie, will never forget.

"He had been feeling off for the last few months – always hungry, constantly thirsty and several nighttime accidents," she says. "We just figured he was going through a growth spurt."

But Lexie started to suspect it may be diabetes, so she bought an over-the-counter glucose test from the drug store. They went to the fire station where her father worked for 40 years to give Easton the test. "I will never forget the look in the paramedic's eyes when he read the test," she says. "He looked up at me and told me to take Easton straight to the emergency department."

Making sense of a new normal

That day at the fire station, and the immediate trip to the Children's Health℠ emergency department, started a new journey for Easton and his parents. He was diagnosed with type 1 diabetes and admitted to the hospital for three days.

During that time, he and his family met with physicians, providers, dietitians and diabetes educators to learn about his diagnosis.

"There was so much we didn't know," explains Lexie. "I remember sitting in the hospital wondering how we were going to make this happen."

Easton and his family began to work their way through his diagnosis and what it meant for their everyday. They began to check his blood sugar levels before meals and snacks so they could tailor the amount of insulin to his body's needs.

"It was really tough in the beginning," admits Lexie. "Easton realized that every time he ate, he got a shot. He stopped wanting to eat."

Finally, the family settled into a routine that works for Easton. His continuous glucose monitor notifies his parents, his grandmother and the school nurse whenever his blood sugar gets above or below a certain threshold.

The family also learned how to accommodate Easton's eating habits and growth spurts with the insulin he needs.

"It's different every single time," says Lexie. "What works one day may not work the next. We are constantly checking, tweaking and adjusting what we do."

That approach is something that Lexie wishes she realized sooner.

"A diabetes diagnosis is so overwhelming," she explains. "I wish I knew then what I know now – that there's nothing he can't eat that we can't fix. We stay on top of his insulin and he's managing it beautifully."

Lexie and her husband knew they wanted something positive to come from Easton's diagnosis. 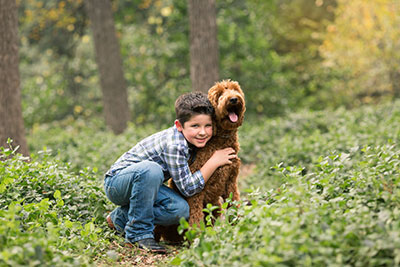 "Easton always wanted a dog named River," she says. "When we were in the hospital, we learned about diabetic service dogs. After a lot of research, we decided this was what we wanted to do for Easton."

Easton's entire family and community came together to help raise money for a diabetic service dog, including the fire department where he had that fateful blood glucose test. His family raised the funds necessary, and in April 2018 they welcomed River to the family.

"We kept this a secret the entire time. Easton had no idea," Lexie shares. "One day we were outside playing and a car pulled up to the house. When River and his handler got out of the car, Easton just kept looking around and asking if it was for real."

River alerts Lexie whenever Easton's blood sugar levels fall out of range. One particularly impressive moment came during a baseball game. Easton was standing on third base, looking healthy and alert. River, who was sitting with Lexie and her father past the first base line, suddenly sat up and got antsy.

"I checked Easton's continuous glucose monitor and it was fine," Lexie recalls. "It goes off every five minutes, but I could tell it was about to change. The new number was still in range, but the arrow was going down. His glucose was falling fast."

Next thing, Easton tapped his coach on the shoulder and ran over to his mom. He told Lexie he was feeling "droopy," his description of how he feels when his glucose levels drop.

"River knew that Easton's levels were dropping before he did," Lexie says. "He beat my son and he beat the machine."

Supporting others on their journey

Easton's diagnosis has been an adjustment for Easton and his entire family. He still has his good days and bad days with his diagnosis.

But even with the frustrations, Easton goes out of his way to educate and support others.

"He was the first person at his school diagnosed with type 1 diabetes," Lexie says. "When another, older boy was diagnosed, Easton took him under his wing. Now, they are buddies. Easton's a rock star – just super strong."

Abha Choudhary, M.D., and the team at the Endocrinology Clinic at Children's Health, continue to monitor Easton and his diabetes. Once every three months, he has an appointment to check his blood sugar levels and his A1C levels, which tells his providers what his average blood glucose levels has been for the past two to three months.