After navigating food allergies as an infant, Carson returned to Children's Health to fight leukemia and is now thriving

Carson's family was referred to J. Andrew Bird, M.D., Director of the Food Allergy Center at Children's Health℠ and Associate Professor at UT Southwestern, who helped them identify "safe" foods to incorporate into Carson's diet as he began eating solids.

Still, by the time Carson was a toddler, he wasn't gaining enough weight. His gastroenterologist, Bradley Barth, M.D., Division Director of Pediatric Gastroenterology at Children's Health and Professor at UT Southwestern, placed a gastrostomy tube (G-tube) into Carson's stomach to ensure that he received the proper nutrition. The G-tube was a game-changer, according to Stephanie.

"Once Carson was able to get the right nutrients and medications into his system, he started gaining weight and was a much happier child because it didn't hurt when he ate," she says.

Over the next several months, Carson and his family settled into a routine with timed feeds and medications, and Drs. Bird and Barth monitored his progress, making adjustments as needed.

Growing pains turn into something more

However, a few months before Carson's fourth birthday, he began complaining that his legs hurt. His pediatrician believed it could just be growing pains and suggested giving Carson ibuprofen and monitoring him. A few days later, however, Stephanie received a call from Carson's school informing her that Carson was now in so much pain, he had stopped walking. Stephanie immediately brought him to the emergency room at Children's Medical Center Plano.

Carson was admitted to the hospital for additional testing, and on April 4, 2013, he and his family received news that would change their lives forever: Carson had acute lymphocytic leukemia. 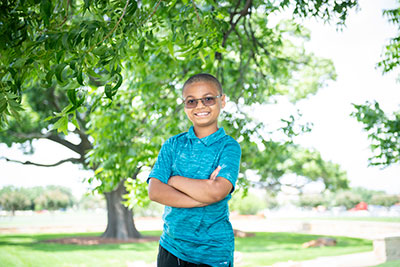 Carson was transferred to the Pauline Allen Gill Center for Cancer and Blood Disorders at Children's Health, where he met with pediatric oncology experts and prepared for the fight of his life.

For the next two years, Carson underwent chemotherapy treatments, complicated by several admissions to the intensive care unit (ICU), and worked with physical and occupational therapists to learn to walk again and regain strength in his hands. He was almost 7 by the time he completed his treatments.

Stephanie says it was a difficult time for Carson and their family, but they were grateful for the support of the team at Children's Health and the bright spots they experienced along the way – including a trip to Disney World, SeaWorld and LEGOLAND in Orlando thanks to a Wish with Wings.

"Our trip with a Wish with Wings was so special and such a pick-me-up for both of us in the midst of Carson's treatments," says Stephanie.

A mom is grateful for her child's "normal" life

Carson is now almost 11 years old and is thriving. He enjoys reading, singing and playing games with friends. He is also a proud big brother to two sisters. 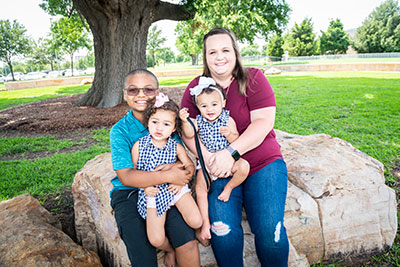 Carson is monitored through the After the Cancer Experience (ACE) program at Children's Health, which provides medical care and support for survivors of childhood cancer. His G-tube should be removed very soon, as his food allergies have subsided.

For Stephanie, looking back at Carson's time at Children's Health reminds her of all they have to be grateful and hopeful for as they look to the future.

"I look back at Christmas pictures from those years in the hospital and remember wondering if we'd even have a Christmas with Carson in four years," she says. "Now, thanks to the team at Children's Health, he gets to just be a normal kid and big brother. We are so grateful."

Children's Health is committed to providing multidisciplinary and family-centered care, from comprehensive support for food allergies to cutting-edge cancer treatment. Learn more about our programs and services.