After chronic vomiting affected a young boy’s daily life, he and his family found the support they needed at Children's Health

Vance is an active 6-year-old who enjoys gymnastics, dance and school. He has a great sense of humor and enjoys spending time with his large family, which includes five loving big brothers.

Shortly after Vance was born, however, his mom, April, noticed that he seemed to spit up more than what she thought was normal for a newborn. But his first pediatrician didn't seem concerned – even though Vance was struggling to gain weight.

Baby Vance struggled to keep food down, so April decided it was time to seek a second opinion.

"At Vance's first appointment with a new pediatrician, the doctor took one look at him, saw he was underweight and immediately knew that something wasn't right," says April.

Vance was referred to a local pediatric gastroenterologist (GI) doctor who performed a colonoscopy and endoscopy to check for abnormalities. The doctor put Vance on a specialized formula to try to help him gain weight.

"It was such a challenging time," April says. "We had to do weekly weigh-ins to see if he was gaining even an ounce."

Despite his family's and GI doctor's best efforts, Vance continued to throw up multiple times a day and struggled to gain weight. For April, dealing with the mess – and the rude stares that often came with it – simply became part of her new normal. 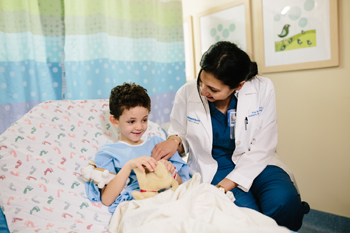 Once Vance's gastroenterologist shared they had exhausted all their options under his care, April and Todd began looking for additional resources and answers for their then 1-year-old son. That's when they were referred to Rina Sanghavi, M.D., Director of the Neurogastroenterology and GI Motility program and Co-Director of the Functional Abdominal Pain and the Pediatric Aerodigestive programs at Children's Health℠ and Associate Professor at UT Southwestern.

Dr. Sanghavi suggested the family consider an innovative approach to addressing Vance's motility challenges. Through an endoscopic procedure, Dr. Sanghavi injected the drug commonly known as Botox directly into the pyloric sphincter, the meeting place between the stomach and the small intestine, to help open the muscle and allow food to empty into his small intestine more easily.

"Vomiting is often overlooked as an annoyance, but for Vance and his family, it significantly affected quality of life," says Dr. Sanghavi. "After he failed medical management, we decided to go to the next step of therapy by injecting Botox to his stomach exit. It was an uphill battle getting insurance to approve this, but the end result speaks for itself!" 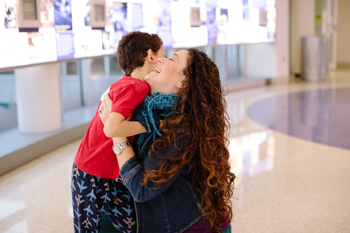 The procedure was a success. For the first time, Vance was able to eat without vomiting. In April's mind, the GI treatment, Botox injection to the pylorus, marked a pivotal moment in her son's and her family's lives that gave them a newfound freedom and peace of mind to be out in public again.

"It has made such a difference to be able to go places and not have to clean up vomit or be looked at like my son has some sort of stomach bug that we're exposing the world to," April says. "I can drive my car and not be afraid of my son choking on his own vomit. I even had to make the waist of his pants a little bigger, which was a thrilling moment for me."

Thriving and connecting with other families 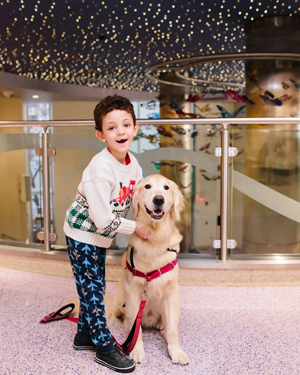 In 2018, Vance was diagnosed with Kabuki syndrome, a rare, genetic disorder that can affect multiple systems throughout the body, including the GI tract. After learning about Vance's diagnosis, April and her husband, Todd, made efforts to talk with other special families, including those in the Kabuki community.

"It was helpful to connect with other families who had gone through similar challenges, and to realize that we were not alone," she says.

Since his first treatment to manage his vomiting, Vance has received three additional injections, as the effects wear off over time. Dr. Sanghavi continues to closely monitor Vance's progress, and she and his family will work together to adjust his care as needed to allow him to grow and thrive.

"It has been wonderful to have the opportunity to watch Vance thrive and grow with these Botox treatments," says Dr. Sanghavi. "We have not only helped his vomiting and improved his nutrition, we have allowed him and his family to have a better quality of life."

The pediatric GI team at Children's Health offers minimally invasive diagnostic techniques and the latest innovative treatments delivered with a personalized approach that prioritizes peace of mind. Learn more about our Gastroenterology program and services.