Children's Health receives several awards and honors annually, which we believe to be a reflection of our dedication to excellent healthcare and service. We are honored to have been the recipient of the following recognitions and awards:

The Only Health System in Texas to Make the List.

Children’s Health was once again named to the InformationWeek Elite 100 in 2016. We are the only health system in Texas to make the list. This prestigious award recognizes the nation’s most innovative users of information technology.

Consistently named as one of the top pediatric hospitals in the country.

150 Best Places to Work in Healthcare

Nine Years in a Row.

Children’s Health has been named for nine consecutive years as one of the 150 Best Places to Work in Healthcare by Becker’s Hospital Reviews. Children’s Health was chosen based on our robust benefits, wellness initiatives, professional development opportunities and work environment that promotes employee collaboration and satisfaction.

The Only NCI- Designated Cancer Center in North Texas.

Physicians at the Pauline Allen Gill Center for Cancer and Blood Disorders at Children’s Health are engaged in a wide range of clinical research efforts spanning the cancer and blood disease programs. Clinical research efforts are supported by robust infrastructure provided by the Clinical Research Office (CRO) within the Gill Center and the Simmons Comprehensive Cancer Center at UT Southwestern, the only NCI- designated cancer center in North Texas. The NCI-Designated Cancer Centers program recognizes centers around the country that meet rigorous criteria for world-class, state-of-the-art programs in multidisciplinary cancer research that will lead to better approaches for the prevention, diagnosis and treatment of cancer.

The original six Pediatric Group locations received Level 3 NCQA PCMH Recognition for using evidence-based, patient-centered processes that focus on highly coordinated care and long‐term, participative relationships. Children’s was one of the first organizations in the nation to be recognized as a Level 3 under the NCQA’s newest guidelines.

Only Health System in Texas Named to the List

Since 2005, HIMSS Analytics has tracked the adoption of EMR applications within hospitals and health systems across the U.S. Hospitals work to complete each stage of adoption, with the ultimate goal of reaching a Stage 7. Children’s Medical Center Dallas was the first hospital in Texas to reach Stage 7. As a Stage 7 health care organization, Children’s Medical Center Dallas is recognized for delivering patient data in a way that ultimately improves process performance, quality of care and patient safety.

One Fourth of Electricity Use is Backed by Renewable Energy Credits

Becker’s Hospital Reviews recognized Children’s Health as one of the top 50 greenest hospitals in America. As of July 2016, one fourth of electricity use is backed by renewable energy credits, equivalent to removing more than 16 million pounds per year of carbon dioxide from nature.

Becker’s Hospital Review recognized the Children’s Health Virtual Health and Innovation program as one of the 50 hospitals with innovation programs due to the goal to invest and partner with companies, technologies and organizations on care delivery. 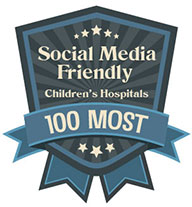