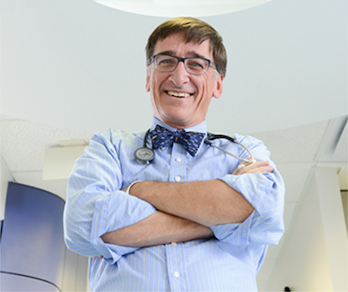 Patrick Leavey, M.D., is the associate medical director for clinical affairs for the Pauline Allen Gill Center for Cancer and Blood Disorders and the director of the Musculoskeletal Tumors Program at Children’s Health℠. He is also a professor of pediatrics at UT Southwestern Medical Center.

Dr. Leavey’s experience as a physician has spanned three continents; he has practiced medicine in Ireland, Australia and two states in the U.S. After working all over the world, he believes the collaborative opportunities for physicians are unsurpassed in Dallas, with the most advanced care practices for pediatric cancer happening as a result of UT Southwestern’s collaboration with Children’s Health.

Dr. Leavey specializes in caring for children with sarcoma and bone tumors. His research interests mirror his clinical expertise with work on multiple studies funded by the Cancer Prevention Research Institute of Texas, including a statewide sarcoma biology study and the development of computational systems in osteosarcoma. Dr. Leavey is also the chair of the international AEWS1031 study for newly diagnosed patients with non-metastatic Ewing sarcoma at the Children’s Oncology Group.

Dr. Leavey has been listed among the best pediatric specialists in Dallas for many years. He is the vice president of the Board of Trustees of the American Society of Pediatric Hematology/Oncology and the secretary-treasurer of the Council of Pediatric Subspecialties.

As a father of four children, Dr. Leavey spent most of his free time with his children when they were younger. Heading into empty-nesting, Dr. Leavey now enjoys exercise, going for walks and reading when he isn’t working to save children’s lives.