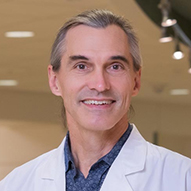 Dr. Dale Swift is happiest when a pediatric patient recovers so well from a neurosurgical procedure that he or she doesn’t even realize the condition was a big deal—and when the parents never notice any negative effects on their child’s personality or life.

“I’m inspired every day by these kids,” says Dr. Swift. “They’re always so motivated to get better.”

I’m inspired every day by these kids. They're always so motivated to get better.

Part of the neurosurgical team at Children’s Health℠ since 1992, Dr. Swift performs  a wide variety of surgeries to treat numerous conditions, including complex procedures to address cerebrovascular anomalies that can take up to 20 hours in the operating room.

Dr. Swift spends much of his time educating the families of his young patients.

“It’s so important for parents to ask all the questions they can and understand the situation – to know nearly as much as I know,” he says. “I want to be able to communicate with them, not scare them, and I want them to be confident and optimistic but also have realistic expectations. Even if I can’t cure the child, I help them understand what’s going on.”

He’s known best in the media as the neurosurgeon who planned, and participated in, the surgery to separate Egyptian conjoined twins Mohamed and Ahmed Ibrahim in 2003.

“It wasn’t the longest or toughest operation I’ve ever done, but it certainly got the most media attention,” says Dr. Swift, of separating the toddlers, who were joined at the crown of the head. “And it was probably one of the most successful separation surgeries, of that type, that had ever been done.”

Dr. Swift is optimistic about the future of pediatric neurosurgery, and neurosurgery in general, as the field sees better outcomes stemming from new technologies, improvements in technique, and accumulated wisdom. But, he said there is still much to be done to effectively treat the often-complex neurological defects, diseases, and malignancies affecting young patients and their families.

“Everything we do today can be done better, faster, cheaper, and with less risk,” he says. “Every procedure and treatment can – and hopefully will – be improved for our patients.”

He has a special interest in researching and treating Chiari malformation – a congenital defect in the area where the brain and spinal cord connect; pediatric vascular conditions like arteriovenous malformation and cavernous malformation; and moyamoya syndrome, a disease in which certain arteries in a child’s brain are constricted.

Dr. Swift is certified by the American Board of Pediatric Neurological Surgery and the American Board of Neurological Surgery. He earned his medical degree from Case Western Reserve University, served as a surgical intern and completed his residency in neurological surgery at Columbia Presbyterian Hospital, and spent one year in a pediatric neurosurgery fellowship at the University of Pittsburgh.