If your child has been diagnosed with funnel chest, learn about treatment options from a teen who’s been there.

When John started puberty, he noticed a shallow indentation in his chest. After a rapid growth spurt at age 13, the indentation became much more noticeable and began affecting him physically. Soccer games with friends became more challenging due to shortness of breath, and he began wearing a bandana around his neck to hide his chest.

Shortly after turning 14, John, who served as the assistant to his school’s track coach, was waiting for his dad to pick him up after a track meet when the pains in his chest became so severe he was curled up in agony on the floor of the gymnasium. It was then that John and his family decided it was time to figure out if his deformity was more than just a superficial inconvenience.

John’s pediatrician referred him to Adam Alder, M.D., Director of the Center for Pectus and Chest Wall Anomalies at Children’s Health℠. Dr. Alder and his team specialize in treating patients with chest anomalies including pectus excavatum, or “funnel chest,” caused by an abnormal growth of rib cartilage on the sternum which forces it to drop inward, creating a depression in the chest. 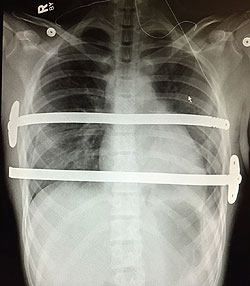 A CT scan confirmed his pectus excavatum diagnosis and revealed that John’s sternum was pushing into the right ventricle of his heart and displacing his heart to the left, explaining why he had been experiencing such pain and difficulty breathing. After thorough discussions with Dr. Alder and his assistant Cheryl, John and his family decided to move forward with surgery, where he would undergo what is known as the Nuss procedure. The minimally invasive procedure involves the insertion of a curved metal bar under the patient’s ribs and secured under the sternum to lift it upward. The bar is left in place for three years, allowing the chest to remold itself outward, and is then removed during outpatient surgery. 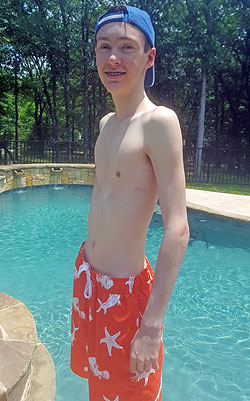 John’s surgery was in July 2016. He went home after just four days with no complications. He’s been back to Children’s Health for a few follow-up visits since surgery and has been ahead of the curve in his recovery. He’s excited to begin exercising again with his peers and enjoying his high school experience.

His father Jim, a physician himself, is the first to admit that he was probably one of the more scrutinizing parents, conducting his own additional research and asking probing questions before, during and after his son’s surgery. Still, he says he was completely comfortable with his John’s decision to pursue surgery and confident in the quality of care from Dr. Alder’s team.

“As a physician myself, I am familiar with all that can occur during and after an operation,” Jim says. “The team at Children’s Health was so kind, answered all our questions and provided such safe and thorough care for my son. We know it was the right decision.”