Fifteen-year-old Jesus recently learned to walk again – a big feat for the all-around sports player whose goal is to get back on the basketball court and football field. In January 2015, Jesus remembers feeling dizzy while playing basketball at school. He stopped for a water break and his next memory is paramedics loading him into an ambulance. He had experienced a seizure. "I remember being in lots of pain," Jesus says.

After being evaluated at a local hospital in Dumas, Texas, an ambulance transported Jesus to a hospital in Amarillo. It was there that doctors realized Jesus had suffered a stroke, causing the blood flow to his brain to be cut off. He needed to see a pediatric specialist. The Children's Health℠ transport team flew Jesus to Children's Medical Center Dallas where a team of experts were waiting to help him.

A week after he was admitted, his condition worsened. Neurosurgeon Bruno Braga, M.D. removed a piece of his skull to relieve pressure on the brainstem caused by swelling.

Jesus moves forward in his journey

Jesus continued to be treated at Children's Health in the Stroke Program which is aligned with the Center for Cerebrovascular Disorders in Children.

Jesus suffered a total of three strokes. His mom, Marisol, is thankful that he was in good hands even if it meant being away from home for more than nine months. 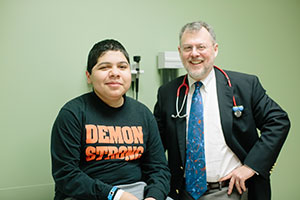 "Jesus is doing well because of the care he received at Children's," Marisol says.

"Dr. Dowling is funny," Jesus says. "He jokes around and makes it easier to deal with." 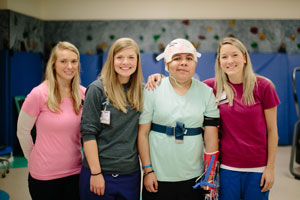 After significant improvement, Jesus was discharged from the hospital and began outpatient therapy. He is very close with his team of physical and occupational therapists and they all agree that he has worked very hard to achieve the progress that he has made. Melissa Kauk, a physical therapist who works with him several days a week says, "Jesus is such a fun patient to work with. He really digs in and is there to participate in every session we have with him. Much of his recovery is due to his attitude and hard work and it's inspiring to be a part of." His favorite activities are working on the elliptical, pedaling on a stationary bike and Wii Boxing. 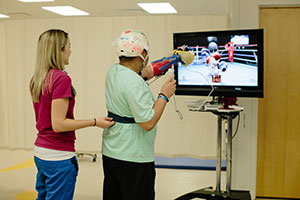 Dr. Dowling credits the collaborative efforts of the entire team and community for helping Jesus on his road to recovery.

"It has been impressive to see how Children's has become a part of his family – they are at physical and occupational therapy multiple days a week and have been staying at the Ronald McDonald House since his discharge from the hospital," Dr. Dowling says. "Because of the collaboration and efforts of a healthcare system and partnership with the community, Jesus has had the opportunity to make a remarkable recovery."

Dr. Braga replaced a piece of his skull, bringing Jesus one step closer to his goals of being back home and back in the game. He looks forward to being reunited with his two younger siblings at home and getting back to studying his favorite subject – World Geography. When asked what advice he would give to others recovering from strokes, Jesus says to "keep on fighting."

The only program of its kind in Texas, the Center for Cerebrovascular Disorders in Children offers the expertise of a collaborative, multidisciplinary team including pediatric neurosurgeons, neurologists, interventional radiologists and neuro-radiologists. Learn more about our programs and services.