A second opinion leads a family to Children's Health for answers

A young boy's kidney is repaired with laparoscopic surgery

In 2016, Joseph, called J.R. by his family and friends, started experiencing pain in his lower abdomen. He was just 7 years old at the time, and his pediatrician suspected he was suffering from constipation. He suggested J.R. increase the amount of fiber in his diet and drink more water.

But nearly a year later, J.R.'s symptoms hadn't subsided – in fact, they were getting much, much worse.

"J.R. began complaining about a 'tapping' in his lower abdomen, which would then turn into cramping and ultimately cause him to start vomiting," says his dad, Steve. "Sometimes the spells would last two to three days, and he began losing weight and had no energy."

By the time J.R. had dropped to 50 pounds, his family and pediatrician feared something more serious was going on. J.R. was referred to a local gastroenterologist and urologist and was eventually diagnosed with hydronephrosis – a condition that occurs when urine collects into the kidney because it's blocked from flowing into the bladder.

A mother searches for a second opinion

J.R., now almost 9 years old, was scheduled for traditional open surgery to repair his kidney on Feb. 14, 2018. Two weeks prior to surgery, his mom, Emily, started to feel uneasy about his upcoming procedure.

"I didn't like the idea of the surgeon making such a large incision to open up his stomach and the recovery time that comes with a procedure like that," she says.

The family began exploring their options and learned about Craig Peters, M.D., the Division Director of Pediatric Urology at Children's Health℠, who is known for his expertise in laparoscopic and robotic surgery. Emily called to schedule an appointment with Dr. Peters and was relieved that he had an opening on Feb. 12, just two days before J.R.’s previously scheduled surgery.

"Within five minutes of talking to Dr. Peters, we knew he was who we wanted to take care of J.R.," Emily says. "We had been to so many doctors over the years who always seemed so rushed, but Dr. Peters really took his time to understand J.R.'s needs and explain exactly what our options were. In fact, he even started responding to my emails before our first appointment."

A cutting-edge surgery makes a young boy flip for joy

Dr. Peters planned to repair J.R.'s kidney laparoscopically, a minimally invasive approach that only requires 3 incisions that are less than a quarter inch.

"We are one of few, if not the only, large children's hospitals where all full-time faculty [providers] are certified in robotic surgery," Dr. Peters says. "J.R.'s pattern of abdominal pain occurring in episodes is called Deitl's crisis and can often be confused for other causes, but was due to intermittent kinking of the ureter draining the kidney. The ability to correct this using only three small incisions with the precision of the surgical robot has been a great advancement in caring for children with kidney problems. It has also been used in other types of kidney and abdominal surgery."

The surgery lasted four hours, during which Dr. Peters:

Within a day after surgery, J.R. was up walking around and ready to go home. His stent was removed two weeks later, and he was back to his normal self soon after. Since then, his symptoms have disappeared, and his most recent sonogram showed that everything is looking good. For J.R., this means he's preparing to sign up for baseball in the fall and is back to landing flips on the trampoline.

A family feels confident in their decision

For his parents Emily and Steve, there's no question that bringing J.R. to Dr. Peters and Children's Health was the right choice. The signs were everywhere – even in the bookcases of J.R.'s late grandfather. 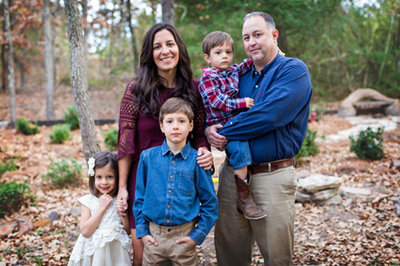 "My mother-in-law was cleaning out my father-in-law's office and found a medical textbook from 1991 about ureteral surgery," says Emily. "It happened to be the same day we first met with Dr. Peters, and I was curious if there was anything in the textbook about J.R.'s issue. When I opened the book, one of the first things I saw was that Dr. Peters was listed as a contributor; it was just further confirmation to us that God had placed Dr. Peters in our life."

The biggest confirmation of their decision, of course, can be seen each day in the smile of their happy and healthy son.