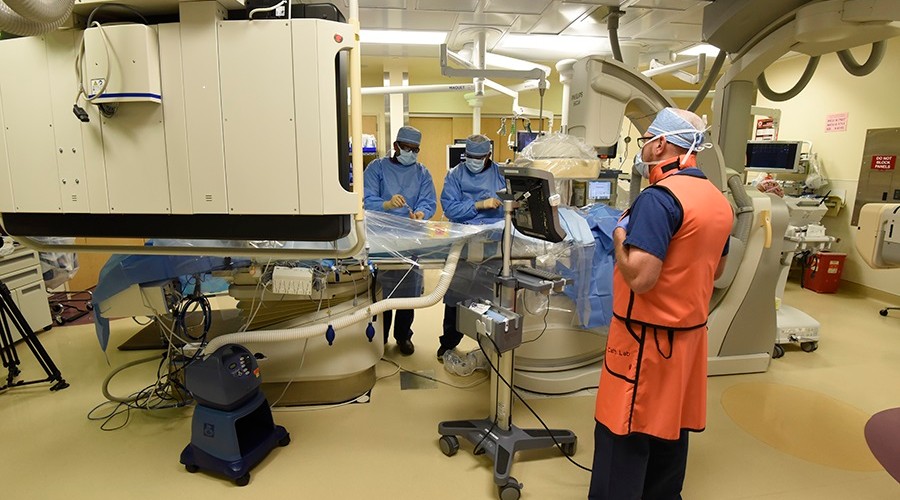 After being transferred to the Level IV NICU at Children’s Health℠ in Dallas, Austen faced one significant challenge –her ductus arteriosus hadn’t closed properly.

“The ability to access every medical and surgical subspecialty within our hospital system can quickly bring to light complex conditions that require immediate and life-saving treatment,” says Rashmin Savani, MBChB, Division Chief of Neonatal-Perinatal Medicine at Children’s Health and Professor at UT Southwestern.

Austen’s medical team, consisting of UT Southwestern physicians who are experts in interventional cardiology, cardiothoracic surgery, radiology and neonatal-perinatal medicine, and her parents decided that a transcatheter patent ductus arteriosus (PDA) closure would give her the best chance for a positive outcome. Transcatheter closure in premature babies is relatively new. Only a few centers in the country, including The Heart Center at Children’s Health, offer it for babies as small as 2 pounds. The smallest premature baby who underwent successful PDA device closure at Children’s Health so far weighed about 2 pounds (900 grams).

“New devices, like the Medtronic Microvascular plug and Abbott Amplatzer Piccolo devices, have made transcatheter closure an option for extremely small babies,” says Surendranath Veeram Reddy, M.D., Pediatric Cardiologist at Children’s Health and Assistant Professor at UT Southwestern, who specializes in interventional cardiology. “In the past, these patients would have been sent to the operating room for surgical PDA ligation via the lateral thoracotomy approach. Transcatheter closure is a win for patients because the procedure is less invasive and offers fewer risks and much shorter recovery.”

1 in 5 Premature Infants Have PDA

Before birth, the aorta and pulmonary artery are connected by the ductus arteriosus – a channel essential to fetal blood circulation. This duct closes shortly after birth in most infants. But the likelihood of spontaneous closure is less than 15 percent in extremely low birthweight infants born prior to 24 weeks.

That makes PDA one of the most common heart problems in premature infants. Nearly 1 in 5 will have a PDA. They should be evaluated thoroughly to see if they have a hemodynamically significant PDA that is causing them harm or delaying their growth.  Left untreated, PDA can cause signs of heart failure and eventually lead to chronic lung disease and pulmonary hypertension.

Going Beyond Medication and Surgery

In premature infants, clinically significant PDAs are usually treated with a combination of fluid restriction and diuresis, and intravenous indomethacin or ibuprofen. Some preemie babies may need respiratory support with nasal cannula or positive pressure ventilation. Medical therapy is successful for about 50 to 65 percent of patients. Patients who fail medical therapy were previously referred for surgical ligation.

Recognizing the need, Dr. Reddy began searching for a transcatheter option for extremely premature infants. He gleaned best practices from the experience of his peers and incorporated those within MVP plug treatment protocols. He started the Preemie Duct Occlusion Program (PDOP) in December 2017.

“We currently have two device options for PDA device closure in extremely premature babies,” Dr. Reddy says. “We started the program with the microvascular plugs that were used off label for PDA closures. Following FDA approval in January 2019, we successfully used the Piccollo device for PDA closure in a set of twin brothers. These devices can be advanced through 1 to 2 mm catheters that are well tolerated by premature babies.

Because these devices are deployed in a minimally invasive procedure, many infants are able to be weaned from artificial respirator support soon after the procedure. The procedure also offers fewer risks and shorter recovery than lateral thoracotomy/duct ligation.

So far, we’ve implanted PDA closure devices in more than 35 premature babies, including Austen. She recovered quickly after the procedure and has been hitting her developmental milestones. As devices and techniques advance, transcatheter closure of PDA could become the first-line treatment for even the most premature infants.

“The devices have made transcatheter closures possible, but it’s our team’s collaboration that really makes the difference,” says Dr. Savani. “We bring together neonatologists, cardiologists, interventional cardiologists and cardiac surgeons to treat PDA in the least invasive and most effective way, so children can grow up healthy and lead their best possible lives.”

Learn more about The Heart Center or about neonatal-perinatal medicine.