Living with chronic constipation: How one girl went from surviving to thriving

A determined motility expert finds answers for Reagan and others

For most people, going to the bathroom comes naturally. But for one little girl and her family it was anything but easy.

"Reagan is our fourth child, and since she was a baby she had trouble with bowel movements," her mom, Amy, recalls. "Her constipation would cause UTIs and make her irritable and uncomfortable. We couldn't figure out why she couldn't poop."

Amy took Reagan to her pediatrician to get answers. That first visit began a nearly eight-year journey for Reagan.

Searching for answers for chronic constipation

Reagan's early years were full of doctor visits, tests, chiropractors and even lengthy hospital stays as specialists tried to figure out the cause of Reagan's issues.

At the time, Reagan was 6 years old. "She was on a regimen of laxatives and suppositories that was more than adults take. It wasn't working," says her mother. "We tested for allergies and other issues and all tests came back negative. No one was sure what was causing her chronic constipation. Every two to three months, we took Reagan to the hospital to clean out her colon. She would stay for a few days. It was awful – for her and our entire family."

One of the hospital stays started the family on a new journey toward answers to the years of questions.

"While at Children's Health℠, we met Dr. Ricardo Medina," Amy says. "He was very interested in Reagan's case, her history and symptoms. He was determined to find an answer. In fact, I kept saying – "You are going to find the answer for my little girl, aren’t you?' He would just smile and say yes, he was going to try."

Starting with a diagnosis

"Constipation in children is a common condition," says Ricardo Andres Medina-Centeno, M.D., Assistant Professor at UT Southwestern. "Most of the time it's temporary and can be addressed with dietary changes, lifestyle interventions, over-the-counter medication or another therapy." 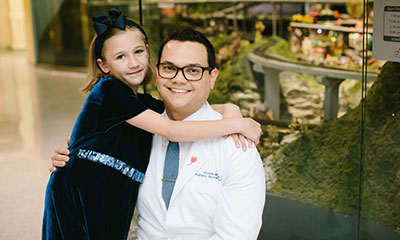 "Chronic constipation – like Reagan's and many others like her – isn't as easy to understand or treat" he explains. "It can have a big impact on a patient's daily life, like it did for Reagan and her family. I wanted to find the cause so we could develop a treatment that would work and improve her quality of life."

It was during that first hospital meeting with Reagan that Dr. Medina began to suspect dyssynergic constipation. The condition, which causes roughly 40 percent of chronic constipation, occurs when the pelvic floor muscles are not working properly to push stool out of the body.

Dr. Medina ordered an anorectal manometry – a test that can measure and monitor how the digestive muscles work together during a bowel movement. The test ultimately proved Dr. Medina's initial hunch was correct. Reagan had dyssynergic constipation.

"It was a relief to finally have a name – an explanation – of Reagan's troubles," Amy remembers. "Dr. Medina told us he knew what was causing Reagan's constipation and the treatment had an 85 percent success rate."

There was one small catch: The program, which is a biofeedback therapy originally designed for women with pelvic floor disorders and urinary incontinence after childbirth, wasn't readily available for children. In fact, only a few hospitals in the country offer the treatment as an option for children with dyssynergic constipation and other types of motility disorders.

Bringing the program to Children's Health

Determined to help Reagan and others, Dr. Medina worked to bring a new gastrointestinal motility program to Children's Health. He traveled to other hospitals, worked closely with the manufacturers of the specialty equipment, trained his staff and within a year, Children's Health offered the area's only biofeedback therapy program to address chronic, severe constipation.

"It was becoming more and more urgent that we figure out a solution for Reagan's constipation," Amy recalls. "She was in school and was becoming more self-aware – and so were her classmates. We were talking about surgery and cecostomy right before the program started, but we never had to go that route because the therapy worked."

During the biofeedback sessions, Reagan was able to see on a screen if she was using her muscles correctly. Dr. Medina and his staff worked closely with her, discussing what was happening and helping her learn how to use her muscles properly.

After several sessions, it began to click. "That's because of Dr. Medina," Amy says. "He said he would figure it out, and he did."

"The last few years have been intense," Amy continues. "There were some really hard times. It was hard to watch her go through it all. Going to the bathroom is a basic function that we tend to take for granted. I wanted her to have that independence, and I didn't know if she would. And, now I'm so grateful that she does." 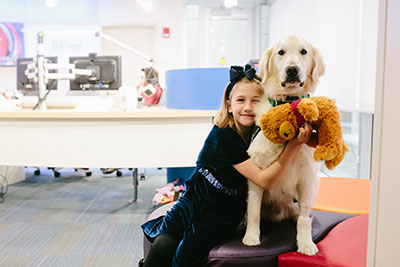 Today, Reagan is a cheerleader, loves playing with friends, visiting the Seacrest Studios, saying hello to Ms. Tamaka in admissions and snuggling with the therapy pups at Children's Health.

"She has this newfound sense of confidence," Amy says. "I used to have to cover her in blankets in a wagon when we went to the hospital. The therapy has helped her transform into who she is today."

Now, others suffering from chronic constipation can benefit from the biofeedback program at Children's Health. The program started with just 11 patients, and has since worked with more than 45 children and continues to expand.

Children's Health is dedicated to helping find answers for children with motility disorders, including dyssynergic constipation. Our gastrointestinal motility program offers the latest technology and treatment to resolve your child's severe constipation and other motility disorders. Learn more about our programs and services.