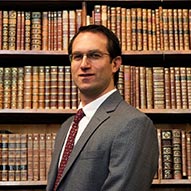 Daniel Gossett, M.D. is a pediatric neurologist and the Medical Director of the Epilepsy Center at Children’s Medical Center Plano.

Working with children has always been a calling for Dr. Gossett. Before medical school, he spent five years as a teacher – an experience that influenced his decision to go into pediatrics. As a doctor, he’s passionate about helping kids overcome health challenges and live their best lives.

Dr. Gossett’s medical philosophy includes working closely with patients and their families to educate them on a broad range of options and work with them to find their individualized treatment plan.

The best part of his work is seeing patients overcome their seizures and get back to the activities they love. One of the patients of the Epilepsy Center came to him when her seizures were keeping her from dancing. “We were able to diagnose and treat her seizures, then she didn’t come back to be seen for almost two years – she was too busy dancing!” he says.

Dr. Gossett earned his medical degree from UT Southwestern and completed his internship and residency at Children’s Medical Center Dallas. He did fellowships in pediatric epilepsy and child neurology at Children’s Hospital Colorado and UT Southwestern Medical Center. He specializes in treating children with epilepsy, sleep disorders, tics and other movement disorders, ADHD and other neurological disorders.

In his spare time, Dr. Gossett enjoys spending time with his wife and two daughters, hiking with his two dogs, swing dancing and kayaking. He holds a black belt in Judo and has visited more than 25 countries on five continents.