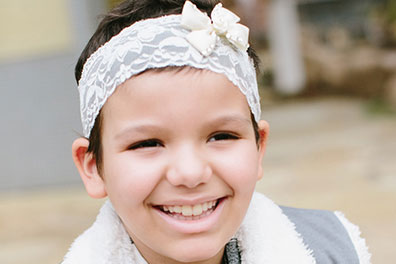 A stranger’s gift gives new life to a young patient

Paulina, now age 8, seems like your typical third grader. She likes math and riding her bicycle and is a great big sister and friend. In fact, from afar, you might never suspect that the young, smiling child you see has overcome more challenges in her young age than most may face in a lifetime. Yet despite it all, she’s retained a smile that shows she realizes she’s been given another chance at life, and she’s going to make the very best of it.

In 2011, at just two and a half years old, Paulina was diagnosed with acute lymphocytic leukemia, or ALL for short. ALL is the most common childhood cancer, affecting nearly 3,000 individuals under the age of 20 in the U.S. each year. She was cared for by the team of experts at the Pauline Allen Gill Center for Cancer and Blood Disorders at Children’s Health, where she underwent chemotherapy and radiation to rid her body of the disease. The cancer responded well to treatment initially, but in 2016, the family received news they never wanted to hear: the leukemia had returned.

This time, chemotherapy didn’t appear to be working as quickly as her doctors would like, so they began exploring options for a bone marrow transplant. Though one in four siblings are typically a match for transplant, neither of Paulina’s younger sisters, nor her mother or father, were appropriate matches. So, with no other prospects in sight, Paulina and her family turned to the Be The Match registry, the largest, most diverse bone marrow donor registry in the world.

Since 1987, Be The Match has helped facilitate 74,000 bone marrow and umbilical cord blood transplants by pairing patients in need of life-saving bone marrow or cord blood transplants with donors from around the world. Each potential donor provides a sample, usually through a cheek swab or blood sample, which is then sent to a lab to map certain protein markers, known as HLA, to determine compatibility with patients awaiting a transplant.

After three months, Paulina was matched with a perfectly matched donor and began preparations for transplant.

“When I first learned that a donor had been identified, I was so relieved to know that Paulina would have what she needed to survive,” says Paulina’s mom Gloria. “Since then, I have been waiting for the day I could meet them in person to thank them for giving life back to my daughter.”

The transplant process itself is quite straightforward and largely resembles a blood transfusion. The donor marrow is infused through the patient’s central line and can take as little as one hour to complete, depending on the volume of cells needed. The new cells take about 10 to 14 days to grow, and Paulina remained in the hospital after her transplant to monitor any signs of infection or other side effects and ensure the bone marrow was working before returning home.

Paulina is now in remission and still visits the Gill Center once a week for follow-up. But, as she looks ahead, with hopes of being a doctor when she grows up, it looks like her future is just as bright as her smile.