Every morning, Roberto wakes up before the sun to take care of his dogs and pick vegetables from his garden. After breakfast, the recent college graduate spends time taking certification courses, researching future internships and preparing for his upcoming move for graduate school.

These accomplishments on their own are much to be proud of, but they are even more remarkable given that just a few years ago, Roberto was unable to use his arms and hands.

When Roberto was just 3 months old, he and his family were visiting a lake near Tyler, Texas, with friends. It was hot, and his mom brought him into the lake to cool off and splash around.

Hours later Roberto spiked a high fever, and his parents took him to a local emergency room. Doctors couldn't find a cause and sent the family home. Within a few hours, however, Roberto became paralyzed. His parents rushed him to a different emergency room where Roberto was immediately flown to Children's Medical Center Dallas for treatment.

Upon arrival in Dallas, doctors began a series of diagnostic tests to determine what was wrong. After an extensive workup, Roberto was diagnosed with transverse myelitis (TM), a rare autoimmune disease that causes damaging swelling of the spinal cord.

Over time, Roberto's condition slowly began to improve – he started moving his head and eventually began breathing on his own. Just before he turned a year old, he was discharged from the hospital but was confined to a wheelchair and relied on a gastrostomy tube (G-tube) for his nutrition. For the next several years, Roberto worked with physical, occupational and speech therapists, and by his fifth birthday, he took his first steps.

Roberto seeks a hand specialist as he grows stronger

Though Roberto grew stronger over the years, he still had little strength in his arms, and he and his family began researching surgical options to restore mobility in his hands. Because his lungs and immune system were still weak from the initial infection, he would require specialized care in an ICU as he recovered from surgery. His doctor referred him to Jonathan Cheng, M.D., Chief of Hand Surgery in the Congenital and Pediatric Hand Surgery Program at Children's Health℠ and Associate Professor at UT Southwestern, for help.

"I was about 11 years old the first time I met Dr. Cheng," Roberto says. "I remember he immediately analyzed my situation and began working to figure out what he could do to help me."

Dr. Cheng explained that they would take the process one step at a time, beginning with surgeries in the summers when Roberto was out of school and making adjustments as needed along the way. Roberto would continue with therapy to improve his strength and motor skills as well.

"It has been an absolute pleasure to work with Roberto and his family from childhood through his maturation into a kind, thoughtful, talented young man," says Dr. Cheng. "From the moment I met him, our shared goal has been to unlock the hidden function in his upper limbs. We have moved step-by-step through a multi-stage, multi-year plan in order to achieve that as he has grown and developed over the years." 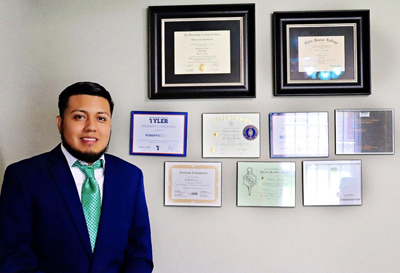 Over the years, Roberto underwent several surgeries under Dr. Cheng's care, including a nerve transfer to restore grip to his hand using a muscle borrowed from his thigh, bone repositioning to adjust the posture of his forearm, wrist and thumb, and tendon transfers to allow him to pick up objects with his fingers and thumb.

After his final surgery in the summer of 2019, Roberto, who once struggled to use his arms and couldn't move his wrists, hands or fingers at all, could write with pen and paper. He now relies less on others for assistance throughout the day and is making the most of his independence. Roberto recently graduated from college with a bachelor's degree in psychology and will start graduate school in the fall to study Industrial Organizational Psychology.

"Dr. Cheng has basically rebuilt me, and I don't know what I'd be doing now without him," says Roberto. "Because of him, I've also grown mentally and just as a person in general. He has done a lot for me, and my family and I are so grateful to him."