Jody grew up with her grandparents in a small town outside of Wichita Falls. She was a typical, healthy 7-year-old who enjoyed school, playing outside with friends and creating artwork. But in 1985, the summer before she started second grade, her eyes started to turn yellow.

Her grandparents brought her to a local doctor, who began what would be a challenging search for answers. It wasn't until the fall that a specialist checked Jody's liver enzymes and discovered her levels were abnormal. She was sent to Children's Medical Center Dallas the very next day, where pediatric gastroenterologists suspected she was experiencing liver failure. 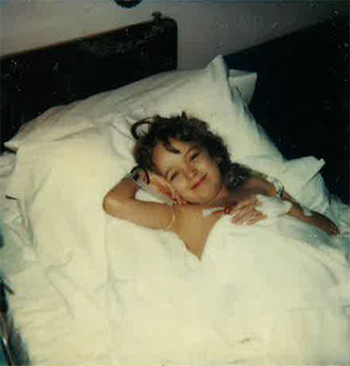 "All of a sudden, here I was in this large hospital with all these people that I didn't know," Jody remembers. "It was very scary."

On Jody's eighth birthday, she had her first surgery: an open liver biopsy with an intraoperative cholangiogram. Results confirmed Jody had primary sclerosing cholangitis (PSC), a chronic liver disease caused by the bile ducts narrowing and hardening over time.

Jody was placed on the national waiting list for a liver transplant.

Jody and her family returned home to anxiously await the call that a donor liver was available for her, but in early December, she was readmitted to the hospital with a fever. It was then that Jody first met John Andersen, M.D., a pediatric gastroenterologist at Children's Health℠ and Professor and Vice Chair of Clinical Operations for the Department of Pediatrics at UT Southwestern.

Tests confirmed Jody had a bacterial infection in her bile ducts system. Due to the severity of her condition, she remained in the hospital for the next several months. Then, in February 1986, Jody received a full liver transplant. 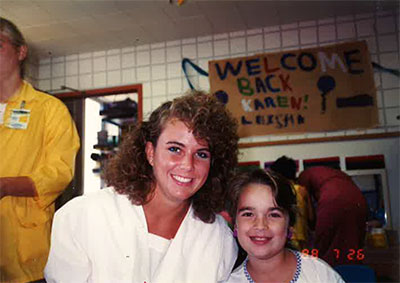 Jody recovered in Dallas for several weeks, and in April, she was able to return home. The liver transplant team including Dr. Andersen monitored her progress to ensure her body did not reject the transplant. As she grew stronger, she was able to return to her normal activities, including being among some of the first Children's Health patients to attend Camp SOAR, an annual weekend retreat for patients who have had a solid organ transplant.

Jody finds fulfillment in giving back

Jody's experiences at Children's Health not only saved her life, but also helped shape her future by revealing exactly what she wanted to be when she grew up: a nurse at Children's Medical Center who helps liver transplant patients.

"My experience in the hospital was amazing, and I had such a circle of caring people around me," Jody says. "I had a curious mind and found everything the nurses and doctors did so fascinating that I wanted to mimic them. When I went back home, I would bring out my home health supplies to play with like I would any other toy." 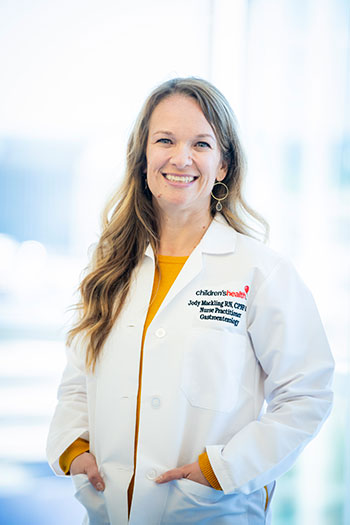 Over the years, Jody worked diligently to reach her goal, eventually returning to Children's Health for her first job after graduating from nursing school. She began working on the same floor that she had been a patient on just a decade earlier.

A few years later, Jody become a pediatric nurse practitioner and was able to reunite with the doctor that had made such an impact in her life early on.

"Dr. Andersen approached me about starting the inpatient nurse practitioner service on the GI floor to care for patients before and after they've received a liver transplant," Jody says. "I've known him since I was 8 years old and consider him one of my mentors, so it has been an honor to work with him again."

Jody's health journey often gives her a unique connection with her patients and their families, perhaps giving families a glimpse of what their child's future could look like.

"I am always willing to share my story with other families when asked," she says. "I think it helps give them a sense of hope that their child can live a healthy, fulfilling life – just like I am."

Children's Health offers one of the largest comprehensive pediatric transplant surgery programs in the country. Our team of experts offer a multidisciplinary approach to care that supports a child's unique physical, emotional, psychological and developmental needs. Learn more about our transplant program and services.