Emerson shows her strength and grace as a heart warrior

After a series of open heart surgeries to repair a congenital heart defect, Emerson is now leaping and spinning through life.

For Emerson, 2021 was a momentous year: She had her third open heart surgery, and she was finally able to go to ballet class with her big sister – a day she had been dreaming about for what seemed like most of her life. And while Emerson continues to perfect her plies and pirouettes on the dance floor, her parents and a team of experts at Children's Health℠ are working together behind the scenes to ensure this little ballerina can twirl and spin to her heart's content.

When Aly was 23 weeks pregnant with Emerson, she assumed her anatomy scan appointment would go just as smoothly as it had with her older daughter. So, when the technician had difficulties finding Emerson's stomach on the sonogram, it came as a big – and worrisome – surprise. A follow-up ultrasound revealed Emerson's stomach had developed on the opposite side of her abdomen than normal, a condition known as situs inversus. Because this condition can also affect other major organs, doctors began examining her other organs while she was still in utero and discovered that both her pulmonary artery and aorta were connected to the right ventricle, a congenital heart defect known as double outlet right ventricle (DORV), that limits the flow of oxygen-rich blood to the body.

Aly and her husband, Clint, were referred to Pediatric Heart Specialists, a Children's Health Care Network Partner, where they met Michael Day, M.D., Medical Director and Cardiologist, and Alan Sing, M.D., a cardiologist to learn and understand their next steps.

"Drs. Day and Sing helped walk us through the care plan for Emerson before her birth and helped us understand what to expect," Aly says. "Decades ago, this diagnosis would have meant comfort care for her after delivery, but thanks to advancements in medicine and treatment, we had hope that her outlook would be very good."

Emerson was born in Feb. 2017 at 36 weeks and was admitted to the neonatal intensive care unit shortly after delivery, where she was initially breathing on her own. Shortly after, however, fluid from an umbilical IV line began to leak into the space around her heart, causing her heart to stop beating and a lung to collapse. Doctors were able to revive her, but she was intubated while a machine breathed for her.

"We weren't sure she would make it through the night," Aly says. "But she was so strong and fought so hard."

Over the next few months as Emerson grew stronger, her breathing tube was removed, and she underwent surgery to repair a problem in her small intestines called malrotation. Dr. Sing continued to monitor her oxygen saturation levels to measure her heart’s function, which would determine when or if she would need to begin a series of surgeries to repair her heart abnormality. Finally, at 3 months old, she was able to go home, just before the Easter holiday.

By May, however, Emerson's blood oxygen saturation levels had dropped to a concerning level, and Dr. Sing and her family knew it was time for her first open heart surgery. Through a surgical procedure known as the Glenn procedure, a surgeon connected the major vein carrying oxygen-poor blood from the upper half of Emerson’s body to her pulmonary artery. This allowed the blood to pass through the lungs directly to gain oxygen and give her heart a break from pumping twice as hard to move the blood through to be re-oxygenated. Once Emerson recovered from surgery, she returned home to be with her big sister, and her parents continued to closely monitor her oxygen levels under the guidance of Dr. Sing. She began speech and physical therapy and learned to walk when she was 19 months old.

"Emerson did really well after her Glenn procedure," Aly says. "She couldn't run around as much as the other little kids but was a happy little girl." 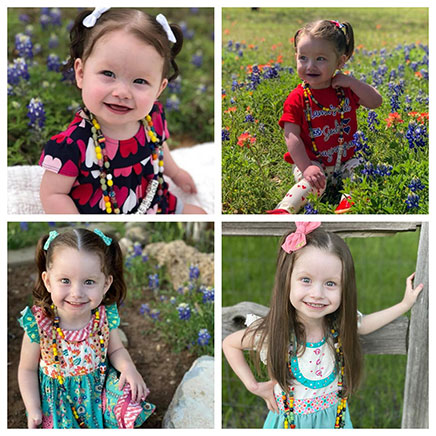 For the next three years, Dr. Sing kept a close eye on Emerson's progress. She had regular EKGs and echocardiograms to ensure her heart was functioning properly after the Glenn procedure, and Dr. Sing began proactively monitoring some of the other valves in her heart to ensure issues didn't arise that would affect her saturation levels.

As expected, a few months after Emerson's third birthday, it was time for her next surgery, known as the Fontan procedure. In June 2020, Robert Jaquiss, M.D., Division Director of Pediatric and Congenital Cardiothoracic Surgery and Co-Director of The Heart Center at Children's Health and Professor of Thoracic and Cardiovascular Surgery at UT Southwestern, performed Emerson's second open heart surgery to direct blood from the lower half of her body directly to her lungs through the pulmonary artery, increasing the oxygen levels in her blood. After a month in the hospital, Emerson went home.

While Emerson continued to grow stronger and enjoyed finally being able to, "just be a kid," as Aly describes it, her parents remained in close communication with Dr. Sing and the surgical team at Children's Health to ensure the brightest possible future for Emerson.

"When your child gets into a hobby, you learn everything you need to know to help them succeed," Aly says. "We feel the same way with Emerson's heart. We want to learn everything we could about what a heart baby needs so we can do everything possible to help her succeed."

Now Emerson spends her days exploring the world around her, always curious and wanting to know more. In May 2021, a routine heart catheterization revealed a vein behind her heart was directing oxygenated blood away from her heart, requiring another open heart surgery to close off the vein, but in less than a week, she was back home playing with her more than a dozen baby dolls – each with their own unique name.

"It's a joy when Emerson comes to see me. She always has a big smile on her face, and I love being a part of her unique story – seeing her thrive right now is a special privilege," says Dr. Sing.

As she grows older, Emerson, her family and Dr. Sing will work closely together to identify any issues that may arise, but for now, she is focused on playing with friends and perfecting her ballet routines with her big sister.

The nationally renowned team of pediatric cardiologists and subspecialists at Pediatric Heart Specialists, The Heart Center at Children's Health treat the whole spectrum of pediatric heart problems, with a commitment to excellence. Learn more about our cardiology programs and treatments.