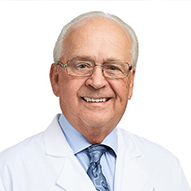 Dr. James Andrews is available for consultation on a limited basis, as requested by physicians on the medical staff at the Children’s Health Andrews Institute for Orthopaedics & Sports Medicine.

Dr. James R. Andrews is one of the founding members of Andrews Sports Medicine and Orthopaedic Center in Birmingham, Alabama. He is also co- founder of the American Sports Medicine Institute (ASMI) a non-profit institute dedicated to injury prevention, education and research in orthopedic and sports medicine. Dr. Andrews continues to serve as Chairman of the Board and Medical Director of ASMI. Dr. Andrews is also a founding partner and Medical Director of the Andrews Institute in Gulf Breeze, Florida. He is President and Chairman of the Board of the Andrews Research and Education Foundation also dedicated to prevention, education and research at the Andrews Institute. He has mentored more than 314 orthopedic/sports medicine Fellows and more than 84 primary care sports medicine Fellows who have trained under him through these Sports Medicine Fellowship Programs. Children’s Health partnered with Dr. Andrews to create the Children’s Health Andrews Institute for Orthopaedics & Sports Medicine, the first pediatric-focused orthopedic institute of its kind in North Texas.

Dr. Andrews is known and recognized for his skills as an orthopedic surgeon as well as his scientific and clinic research contributions in knee, shoulder and elbow injury prevention and treatment. In addition, he has made major presentations around the world, and has authored numerous scientific articles and books. He has recently written a book, Any Given Monday, about prevention of youth sports injuries and how to prevent them for athletes, parents and coaches. The book is based on his life in sports medicine and was released in January 2013 by Simon & Schuster.

Dr. Andrews graduated from Louisiana State University (LSU) in 1963, where he was Southeastern Conference indoor and outdoor pole vault champion. He completed LSU School of Medicine in 1967 and completed his orthopedic residency at Tulane Medical School in 1972. He had surgical fellowships in sports medicine at the University of Virginia School of Medicine in 1972 with Dr. Frank McCue, III and at the University of Lyon, Lyon, France in 1972 with the late professor Albert Trillat, M.D., who is known as the Father of European Knee Surgery.

At present, Dr. Andrews serves as Medical Director and Orthopaedic Surgeon for Auburn University Intercollegiate Athletics and Senior Orthopaedic Consultant at the University of Alabama. Dr. Andrews serves on the Medical and Safety Advisory Committee of USA Baseball and on the Board of Little League Baseball, Inc. In the professional sports arena, Dr. Andrews is Senior Consultant for the Washington Football team and Orthopaedic Medical Director for the Tampa Bay Rays Professional Baseball team. Dr. Andrews is also the Medical Director of the Ladies Professional Golf Association. Previously, Dr. Andrews has been a member of the Sports Medicine Committee of the United States Olympic Committee having served during two previous quadrennial. He has also served on the NCAA Competitive Safeguards in Medical Aspects of Sports Committee. He also serves on the Tulane School of Medicine Board of Governors. He has served as a member of Troy University’s Board of Trustees.  Dr. Andrews also serves as the National Medical Director for Physiotherapy Associates, a national outpatient rehabilitation provider. He serves on the Board of Directors of Fast Health Corporation and Robins Morton Construction Company.

Dr. Andrews was inducted into the Alabama Sports Hall of Fame and was named recipient of their Distinguished Sportsman Award in 1992. In 1996, Dr. Andrews was inducted into the LSU Alumni Hall of Distinction. He was featured as one of the LSU’s 2007 Southeastern Conference Stories of Character. In 2008, Dr. Andrews received  the LSU Cox Communication Academic Center for Student-Athletes Distinguished Alumnus of the Year Award and was inducted into the State of Louisiana Sports Hall of Fame and was named recipient of the prestigious Dave Dixon Louisiana Sports Leadership Award. Dr. Andrews is a 2009 recipient of the Live the Dream: award presented by the Birmingham Regional Chamber of Commerce. Dr. Andrews was presented the 2009 Distinguished American Award by the Auburn Chapter of the National Football Foundation and College of Hall of Fame.  In 2014 he was presented with the Contribution to Amateur Athletics Award by the University of Georgia Hall of Fame Chapter.