You must select "I Understand" to see results. 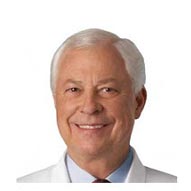 James McCulley, M.D., is an ophthalmologist at Children’s Health℠. He is an internationally recognized specialist in the evaluation and treatment of corneal diseases that affect the eye.

A Fort Worth native, Dr. McCulley received his undergraduate degree from Texas Christian University. He then went to Washington University School of Medicine in St. Louis, Mo., and completed an internship with the Harvard Medical Service at Boston City Hospital. Both his residency and corneal fellowship training were with the Massachusetts Eye & Ear Infirmary (Harvard Medical School) in Boston.

Professor and Chair of the Department of Ophthalmology at UT Southwestern Medical Center since 1981, Dr. McCulley attributes his career trajectory, drive, and work ethic to his family. “My mother was a college professor, and my father was a businessman, and these professions influenced my decision to chair a department,” he says.

As a member of the Food and Drug Administration (FDA) Ophthalmic Devices Panel of the Medical Devices Advisory Committee, Dr. McCulley was among a handful of physicians who worked with the FDA during the LASIK clinical trials approval process. He has been part of LASIK’s continual evolution, from using a microkeratome (blade) to create the corneal flap, to bladeless, all-laser LASIK.

Dr. McCulley has served on many committees and boards, including the UT Southwestern Health Systems Board of Directors, the Clinical Advisory Committee and the Executive Committee of Clinical Chairs. Outside of UT Southwestern, he has served as a member of the Food and Drug Administration’s Ophthalmic Devices Panel of the Medical Devices Advisory Committee, as a Prevent Blindness Texas board member and as Co-Medical Director of the Dallas Lions Sight and Tissue Foundation, among others.

Awards and honors have been part of Dr. McCulley’s career since 1968, when Washington University awarded him the Alumni Award in Internal Medicine. In 2001, he received Texas Christian University’s Alumni Association Distinguished Alumnus Award, followed in 2006 by the Distinguished Alumni Award from the Department of Ophthalmology at Harvard Medical School. In 2012, the Cornea Society awarded Dr. McCulley the Castroviejo Medal, internationally recognized as the highest honor bestowed upon a cornea specialist.

As an invited guest speaker or lecturer, Dr. McCulley has presented at over 200 professional conferences in the U.S., South America, Australia, Europe, Asia and the Middle East. He is a member of multiple professional organizations and sits on the editorial boards of several peer-reviewed journals. Dr. McCulley has published more than 700 peer-reviewed journal papers, citable abstracts, books and book chapters.